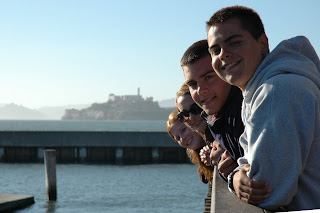 Mike is home from the Army until July 1st. We took him to one of our favorite summer locations where we can pretend to be tourists-Fisherman's Wharf & Pier 39 in San Francisco! We brought Sara and his brother Rob with us. Here is a picture of Sara, Jenna, Mike, and Rob with Alcatraz in the background.

We had so much fun goofing around and enjoying the beautiful weather. We looked at our usual sterling silver rings along the wharf and then made our way to Pier 39. 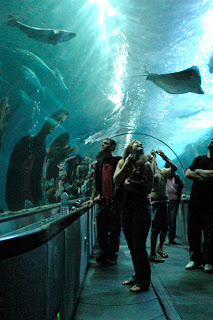 Mike had so many things he wanted to do. It was between Ripley's Believe It or Not, Alcatraz, and the Aquarium of the Bay . It was too late for Alcatraz, so we decided to go to the Aquarium. I don't think I'd ever been there before so I was really excited to go. Dan & I went to the Monterey Bay Aquarium last summer and I was so impressed with it. This aquarium was smaller as expected since space is so limited in San Francisco. I really enjoyed going and this is my favorite photo from the tunnel. They had part of the walkway moving and the other half was stationary. We saw a Giant Sea Bass that was 7 feet long. I think that reminded me of one of the reasons I never swim in S.F.

After that we had ice cream and lots of other yummy candies. We goofed off for a while as we waited to meet Dan, Dad, and Mom up after they got off work. We met them at Hooter's because 5/9 really wanted to go there for dinner. On the way there we passed the Rainforest Cafe and that reminded us how much of a better place it was so we changed our minds . The food was better and the atmosphere was really fun. 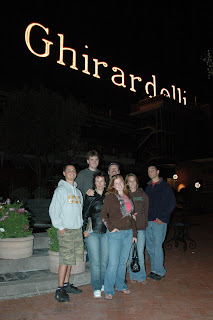 Here is Rob, Dan, Mom, Dad, Sara, Jenna & Mike in front of the lit up Ghirardelli Square sign. We had such a wonderful outing!
Posted by Michelle at 8:21 PM

that aquarium picture is amazing .. i'm jealous i want to take a picture that good there lol but all il have is my point and shoot blah :-(

i've been to that aquarium. my family went to san francisco my sophomore year of college. we stayed at some hotel (like a ramada or something) within walking distance of pier 39 and fisherman's wharf. good times.