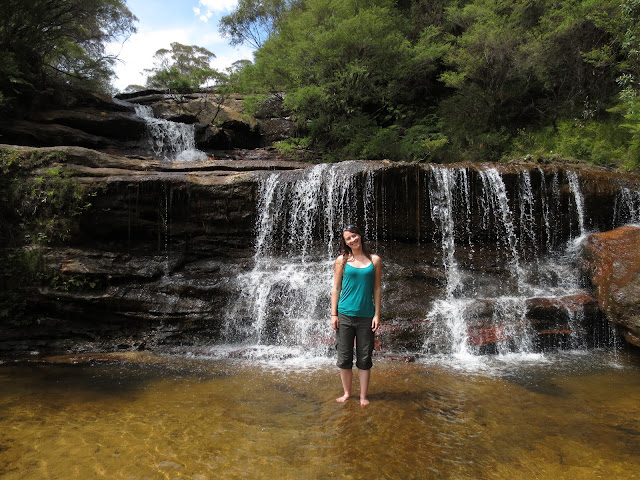 Hello from down under! After a 17+ hour flight, I arrived at the Sydney airport.

I met a girl named Yvette from Alberta, Canada on the shuttle ride to my hostel. Everything is orange here, including to sofa I'm writing from. The staff here claim that the owner of the hostel is an 8 year old daucshaund that drinks out of a cup and prefers to be called Princess.

After a much needed shower, Yvette & I set out to take the CityRail (similar to Bart) to the closest beach, Double Bay. We got on an express train by accident and got dropped off in Bondi Junction, a whole stop past where we were trying to go. We decided to walk around a bit and passed by many decorated houses. Some had funny handwritten notes saying "out of candy, come back in 365 days."

We asked for directions a lot after realizing that our exhaustion was causing us to get further lost. I like to call this an adventure. We finally arrived at the "beach" which was a strip of sand next to a small harbour. Our feet were in a lot of pain so we took the bus back to Kings Cross which is right next to my hostel. I'm happy I'm only staying here one night since I'll be much closer to everything when I stay at another hostel in The Rocks.

We spent the afternoon people watching at a burger joint located right next to a gym. I've been struggling to stay up (since it is not even 9pm here).


Posted by Michelle at 9:54 PM No comments: Links to this post