Lately, a lot of friends have been asking questions about my travels. I never finished blogging about the last two weeks of my trip. So, this post is for those who are traveling to Europe in the near future.

On days that I traveled, I made sure I got out early. Dan wanted to arrive in Paris while there was still light, as did I, so we said goodbye to lovely Brugge and boarded a train by 8am. We arrived at the Charles De Gaulle airport and took the rural train into Paris' center. From there, we purchased metro tickets and rode the metro to our brand new hostel, St. Christopher's Inn. We arrived an hour before check in so we dropped off our luggage and decided to go to the Musee du Louvre. Since Dan let me pick where to look, we spent most of our time looking at Italian paintings (my personal favorites). I got goosebumps seeing works by Cimabue, Giotto, Raphael, Botticelli, Da Vinci, Delcroix, and Michaelangelo. I was surprised at how big the Mona Lisa was. I had heard it was tiny but I guess that is subjective. If you had just spent hours in the large format French paintings, then I could see it being called small. Its not at all small when compared to Vermeer's paintings!

We tried to buy a 7 day metro pass in the station. I accidentally bought tickets that didn't start until Monday. In Europe, their calendar week begins on Monday. We ended up having to buy individual metro tickets all day Sunday. 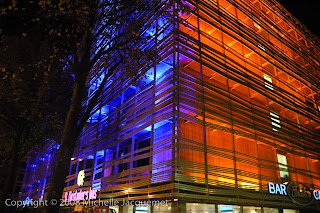 We grabbed a quick snack and headed back to check into our hostel. I was really happy that we were able to get our own private room for 3/4 nights of our stay in Paris. We couldn't get our window to close which wasn't much fun. When I asked the front desk people they told me to find a security guard and get them to help me (never saw one). They had an awesome internet cafe in the building so I researched places to stay in Rome. Not only did they have an internet cafe, they also had a bar/restaurant downstairs. We were exhausted so we had dinner there. I started talking with an Australian girl, Sarah, who was working as a nanny in Kent. She was traveling for a long weekend alone and I thought she might want some company. We made plans to meet the next morning at breakfast.

I was really happy to find that they served Cocoa Crispies for breakfast! I was living off of corn flakes, toast, and sometimes a piece of fruit for breakfast. I loved this change in diet! We decided to go along with Sarah's plans for the day. We started our morning at Sacre Coeur. We had a run in with some irritating con artists from Africa. Just a warning- if you plan to go-be forewarned that these men try to get you to "help" them and before you know it, you or a friend has a bracelet wrapped around your arm so quickly. They tried to demand something ridiculous-up to $100USD equivalent for their"art." I would suggest taking the alternate route to the top of the hill, go on the left side instead of the right. It was a beautiful church that looked like it was designed to look like a mosque. Dan & I spent some time teaching Sarah some basic photo techniques inside the church. We had so much fun watching her photographic eye develop in just a few hours. 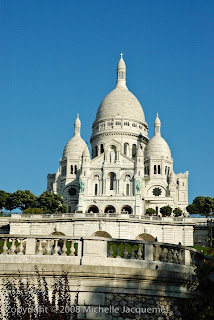 Walked down the Rue Chappe. Photo by Sarah Zrimm. 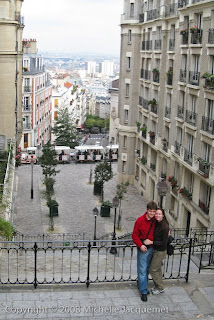 Next, we strolled through the artists of Monmartre. Sarah got her portrait drawn and then we went to Notre Dame. I wasn't impressed with the front entrance, but the side and back had such beautiful detail! Dan & I were going to climb to the top of the dome until we saw how long the wait was. I hadn't encountered such a line through my entire trip! We grabbed a few delicious salami sandwiches and nutella crepes nearby.

I was really happy that I had Rick Steve's Best of Europe 2008 book with me. We wouldn't have experienced Sainte Chapelle if I had not read through the book while we were walking on "the island." It was in the courtyard of the royal palace on the Île de la Cité. It reminded me of a more beautiful version of the dinning hall from Harry Potter. It was incredible! By far, it was my most favorite, most beautiful church to see! 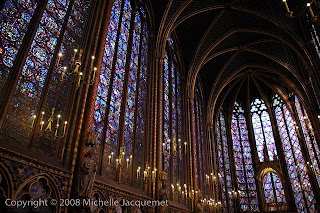 We ran into a large school group at the Arc de Triomphe. They were there to light the torch of the unknown soldier. The traffic it held up was tremendous. When it finally ended, I couldn't believe that anyone would ever drive in the roundabout. I hear that no insurance companies cover accidents that happen there. We watched the sun set from the top of the arc and admired Paris. 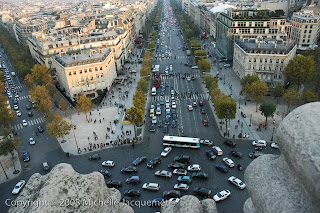 I learned on this trip that i have a fear of heights. I'm pretty sure that the climb to the top of the Eiffel Tower didn't help either. Although very little climbing was involved. Due to cool winds in October, Dan & I opted to take the elevator to the top. I don't think the stairs were even open that late at night. Our friend Sarah accomplished quite a bit by making it to the top of the arc de Triomphe and decided to patiently wait for us to go to the top and come back down. 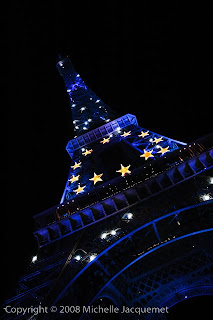 It was rather cramped and very cold at the top. We had to wait in several lines at each level. They lit the tower up in blue and had yellow stars on it for the European Union flag. It even lit up on the hour after dark with white sparkling lights! The views were well worth a little nerves. And, because it was windy, we could even feel the tower swaying in the wind. That was my cue to get back down to the ground! 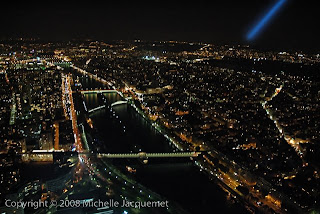 When we got back down, Sarah presented me with a beautiful silver charm of the Eiffel Tower as a reminder of the fact that I conquered my fear and didn't let it prevent me from having a great experience. So sweet! We had a very late dinner back at the hostel. We got polled by two lovely guys about drawings on their arms.

The next morning we tried to buy Versailles passports at Gare du Nord. They didn't sell them there. We took the RER-C train from Paris to Versailles (30 mins). It was raining and there was water in between the double pane windows on the train. It was beautiful. Very similar to many other palaces I saw on my trip. It was so big that I got lost when I went to the bathroom and ended up having to go through the whole thing again just to find Dan & Sarah. Here is a photo of the hall of mirrors. 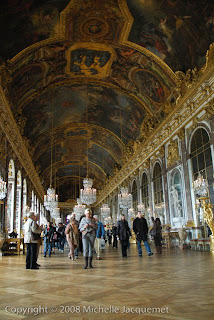 One thing that made it stand out was a ludicrous installation by an American artist using large Mylar balloons in various locations of the palace. I would have loved to continue on the Marie Antoinette's separate building but it was raining hardcore and we were starving. Here are the gardens and the backyard view of the palace: 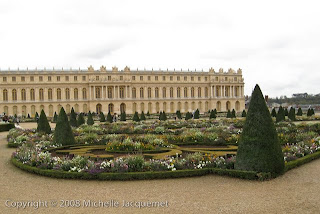 After another exhausting day, we said good bye to Sarah (heading back to work in England) and made reservations for our train ride to Luzern, Switzerland.

My friend Eric flew into Paris the next day and met us at the Louvre. It was so cool having so many friends meet me at various different parts of my trip. We walked through the Tuileries Garden to the Palais. It was so nice to have Eric take some photos for us and with us! Photo by Eric Carter. 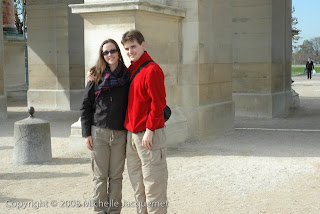 We walked all over Paris taking photos. The clouds were performing well that day! 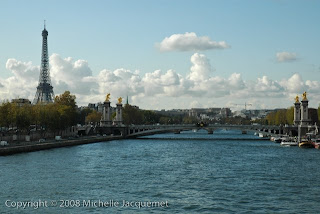 We followed the Seine river the the Invalides and Pont Neuf. I don't remember what building this is. It was beautiful though. 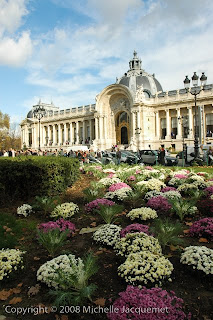 We happened upon a street artist in a balloon doing strange poses: 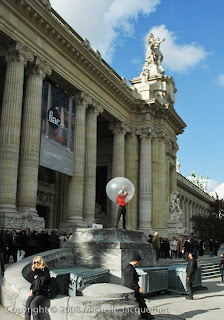 And made our way back to Notre Dame during the golden hour. 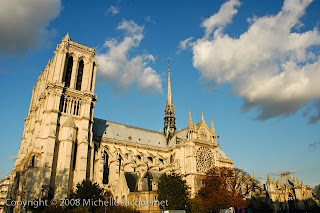 Here is a favorite photo I took of the park/garden behind Notre Dame. It was closed due to security which was very sad, but it made quite the photo. 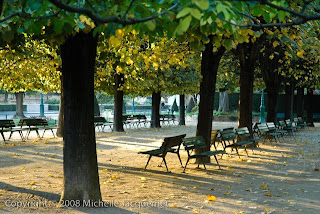 We went back to our hostel to check in and take a nap before dinner. Then we met Eric for dinner in the Monmarte area. We had a beautiful evening taking long exposures and buying postcards. 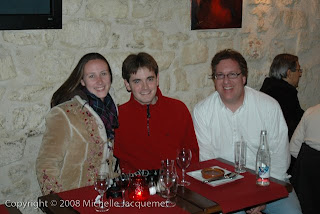 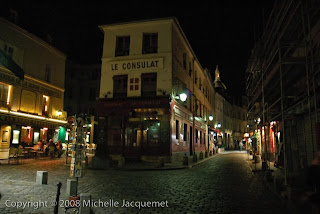 We said our goodbyes at the Metro and headed back to sleep before our long journey to meet Jenna. We woke Thursday not knowing if we had reservations for Rome. That made us very nervous that we hadn't heard back from the Guesthouse owners. Luckily, I had an email from them saying they had space!

Next, we headed to the train station Gare du l'est to make reservations for the second part of our train journey (the following day) to Rome. The people told me in French that all 2nd class was booked for two days and that we wouldn't get to Rome by Friday. We took the train to Basel, Switzerland. This time we found a very helpful Swiss employee who lived just about an hour away from us in Pinole, California! It wasn't cheap, but we managed to get our train ride to Rome for the following day.

I topped up my phone and called Jenna. She had fallen down a flight of stairs in her home in England and was concerned about breaking something. She found medical help and was badly bruised, nothing broken. We bought some groceries at a store at the train station and then caught the train to Luzern. Arrived at dusk. For some reason, the Hotel Pickwick lost our reservations but took us anyway. We had a beautiful view from our balcony that overlooked Laked Luzern. 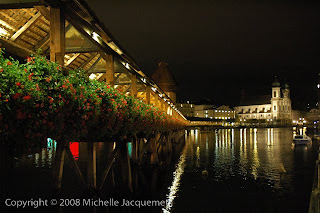 I introduced Dan to the beautiful town and buttered pretzels. Found this beautifully lit fountain while roaming around that night. 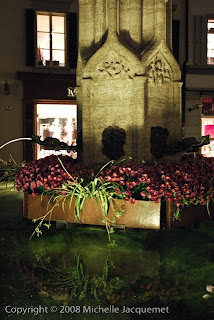 I plan to finish up this mini series in these next few weeks, so check back for more stories and photos!

ahhh- so beautiful to hear about the trip and see your pictures from Europe! Fun about Paris- LOL - I think I never ran into those "art" guys at Monmatre. Did I tell you I got engageed there? Beautiful- keep it up!

Ok I deleted my comment because I made a mistake...

The building you can't remember in Paris is "Petit Palais." The building with the lady in the balloon is across the street. It's the "Grand Palais"

Thanks for keeping that journal. I'd forgotten some of the things you mentioned in the post.

I love looking at your pictures because this is the closest I will probably get to any of these places. Thanks for sharing!

Sigh...Seeying all those pictures makes me want to go to Paris again.I never been to versaille,so you got me way jealous about that!

OMGosh! It's all so beautiful, Michelle! I really hope that Bryan gets stationed in Germany after this next 12 month tour to Afghanistan. I'm dying to visit ALL of the places you've mentioned!