After Dark: Alice in Wonderland

The Exploratorium is a really fun museum geared towards learning how things function from a scientific perspective. After Dark is an adult event held after hours on the first Thursday of each month. February's theme was Surreal.

The Alice in Wonderland Tea Party was first come first serve so we staked out our territory for the 9pm tea party. Jessica quickly made friends and snagged a mask at the beginning of the night. 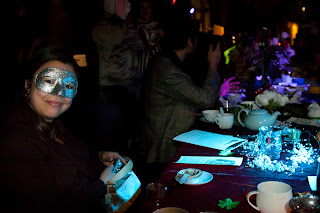 The actors and actresses were in character the entire night. As soon as we were seated and had our tea poured, we were instructed to crawl under the table and switch seats with the person sitting directly across from us. A lion was walked on top of the table and passed out roses. I happily accepted a bunch of tiny red roses in exchanged for passage. 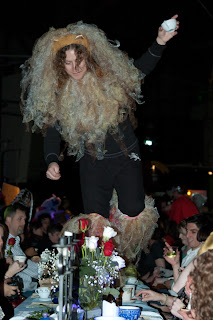 Tea was poured on the table, candles were swapped out for highlighters, and teacups found their way onto the candles. The Queen of Hearts ran around screeching at the top of her lungs "off with her head." 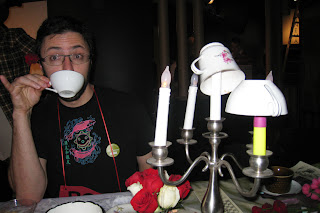 We played with our silhouettes on a glass lit screen. I ate my red rose as if it were a ball of fire. 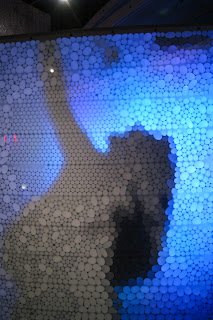 I can't remember how the beetles fit into the surreal theme but Jessica really wanted to touch them-but only if I did. She realized that wasn't happening so she went ahead and held the little sucker anyway. 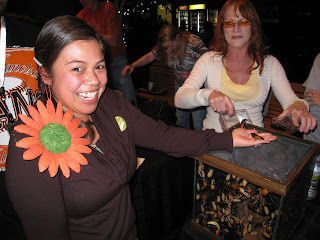 We can't wait to go back and see the shenanigans planned for March!
Posted by Michelle at 11:59 PM

Sooooo cool!!!I had an Alice themed party last year,and it was so much fun!The photo´s look super cool!

Oh, cool!! How fun was that?? Everything sounds like it was fantastic!

Ohmygoodness - how fun and gorgeous does your trip look?! :) Lovely!! I hope you had an awesome time!